Hello, I'm back after a few months off. Anyway, straight into it now. This jersey wasn't my first football shirt but it was the first one that I ordered from overseas and got delivered. I liked the shirt that much that I wore it under my school shirt a few times. Looking back on that now it probably wasn't the best look going.

Nonetheless this was my very first Premier League shirt and it will always be one that I look back on fondly as it was the home kit that my EPL team Manchester City was wearing when they won the title on that fateful day in May 2012 when Sergio Aguero scored the thrilling last minute goal.

The shirt is an Umbro design that from a distance looks basic but actually features a soundwave of the Manchester City fans singing 'Blue Moon'. I got Aguero's name on the back (this was before he scored the league winner) however it's a size or two too small for me to wear now but it's a special jersey in my collection 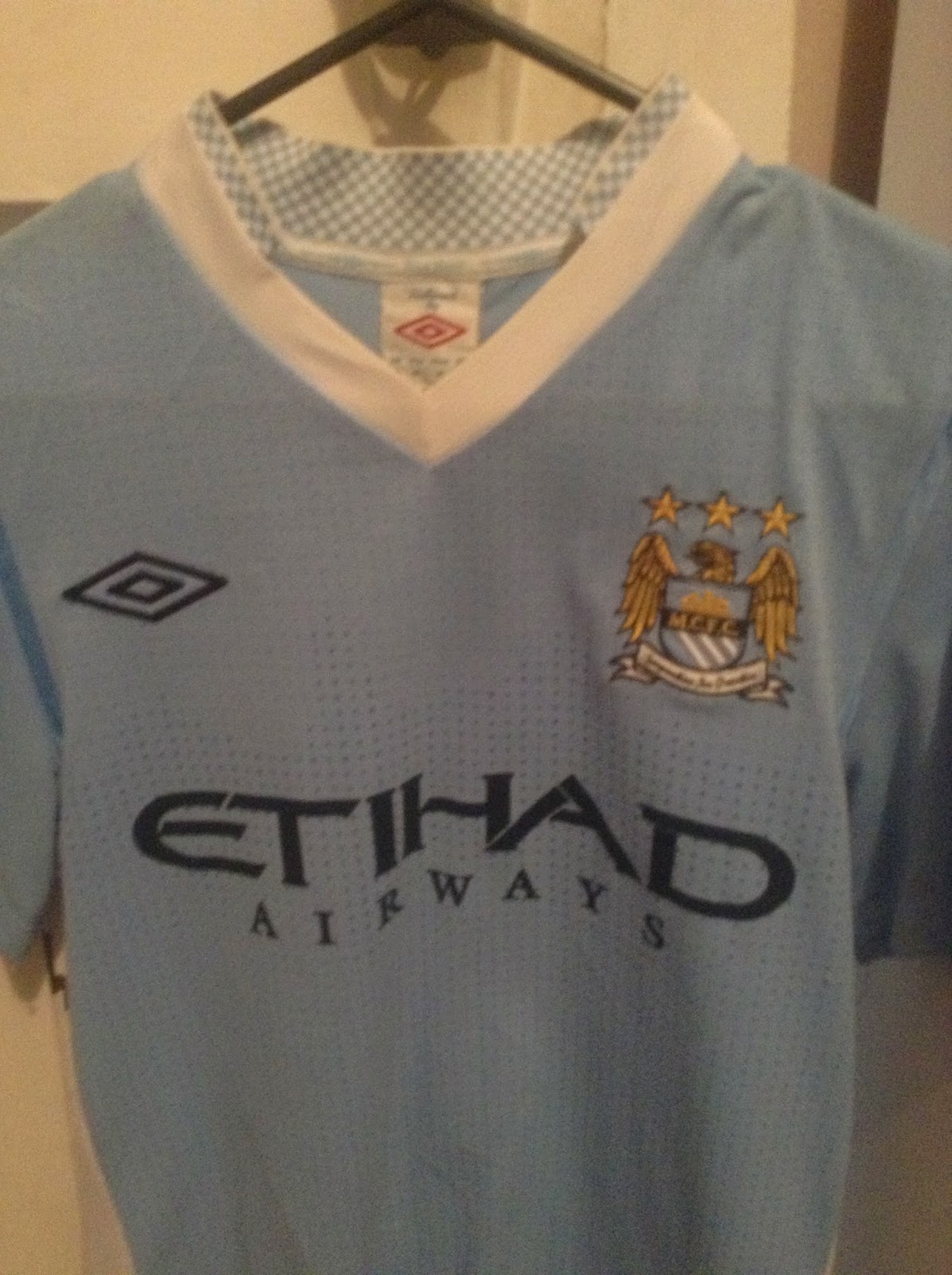 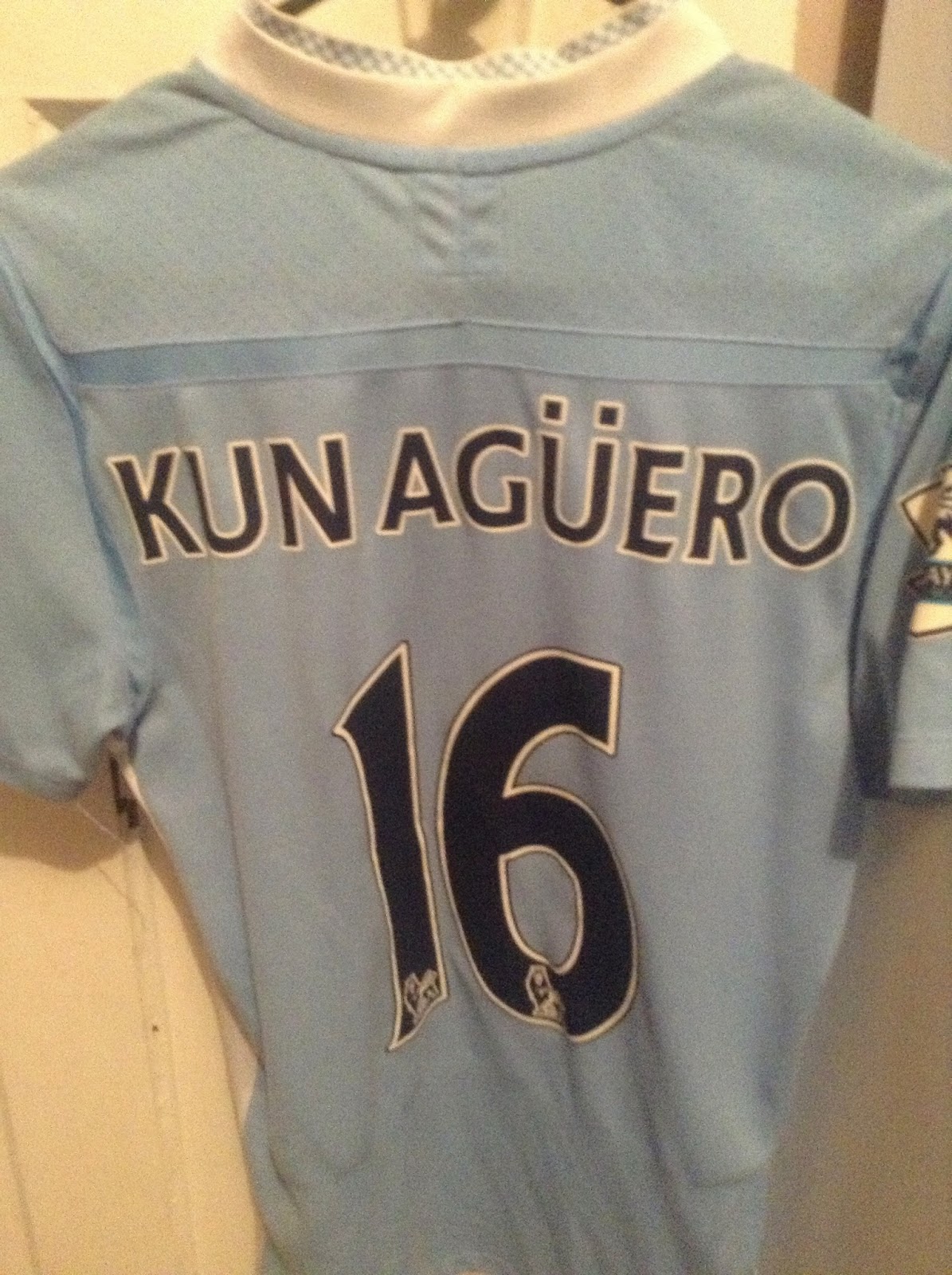 It's been a while since I posted on the blog but I am officially back after a few month's off. Expect a few less articles then normal but I am going to try and post a bit more often.
Posted by Ty Stedman at 16:58 No comments: 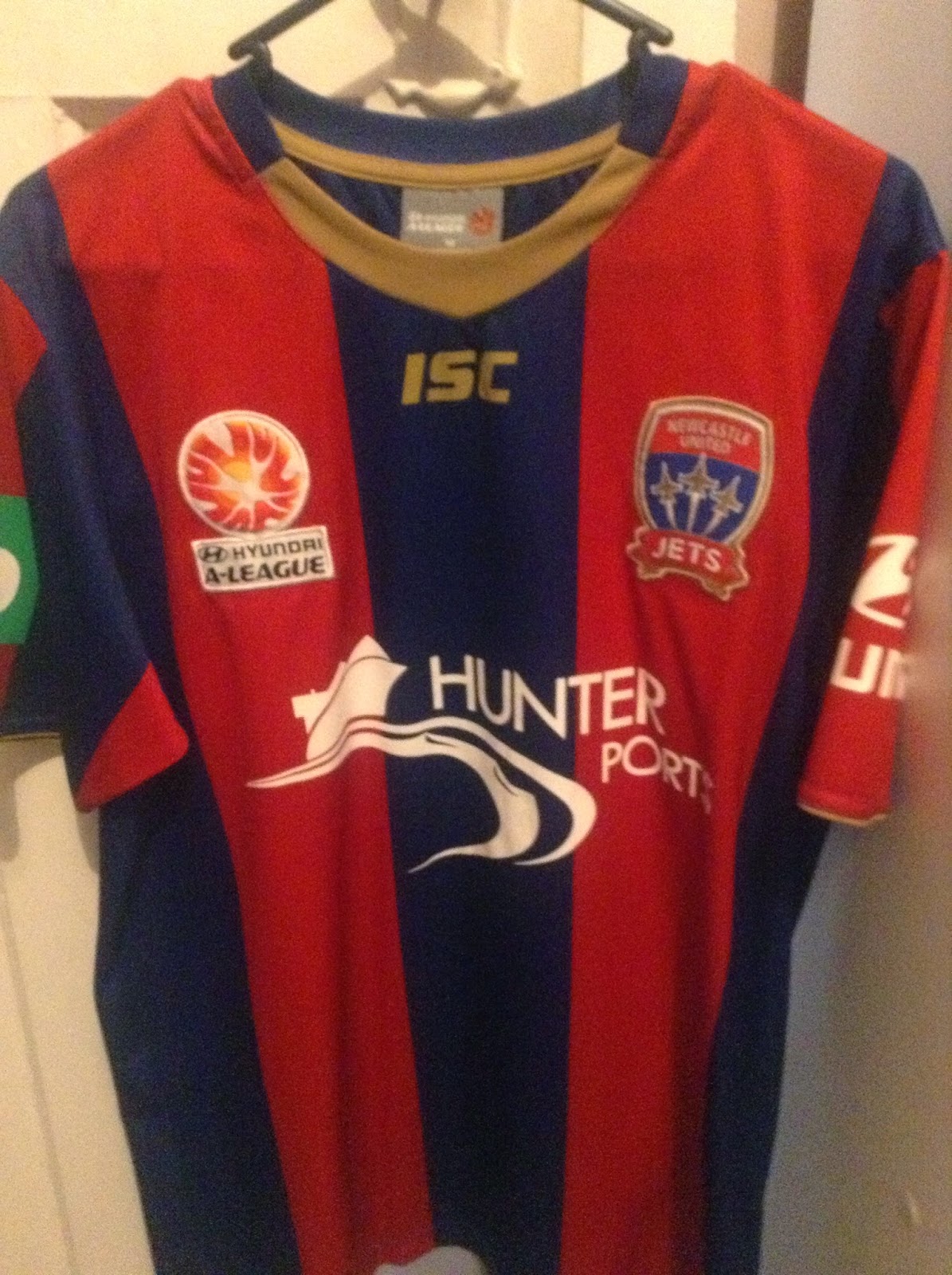 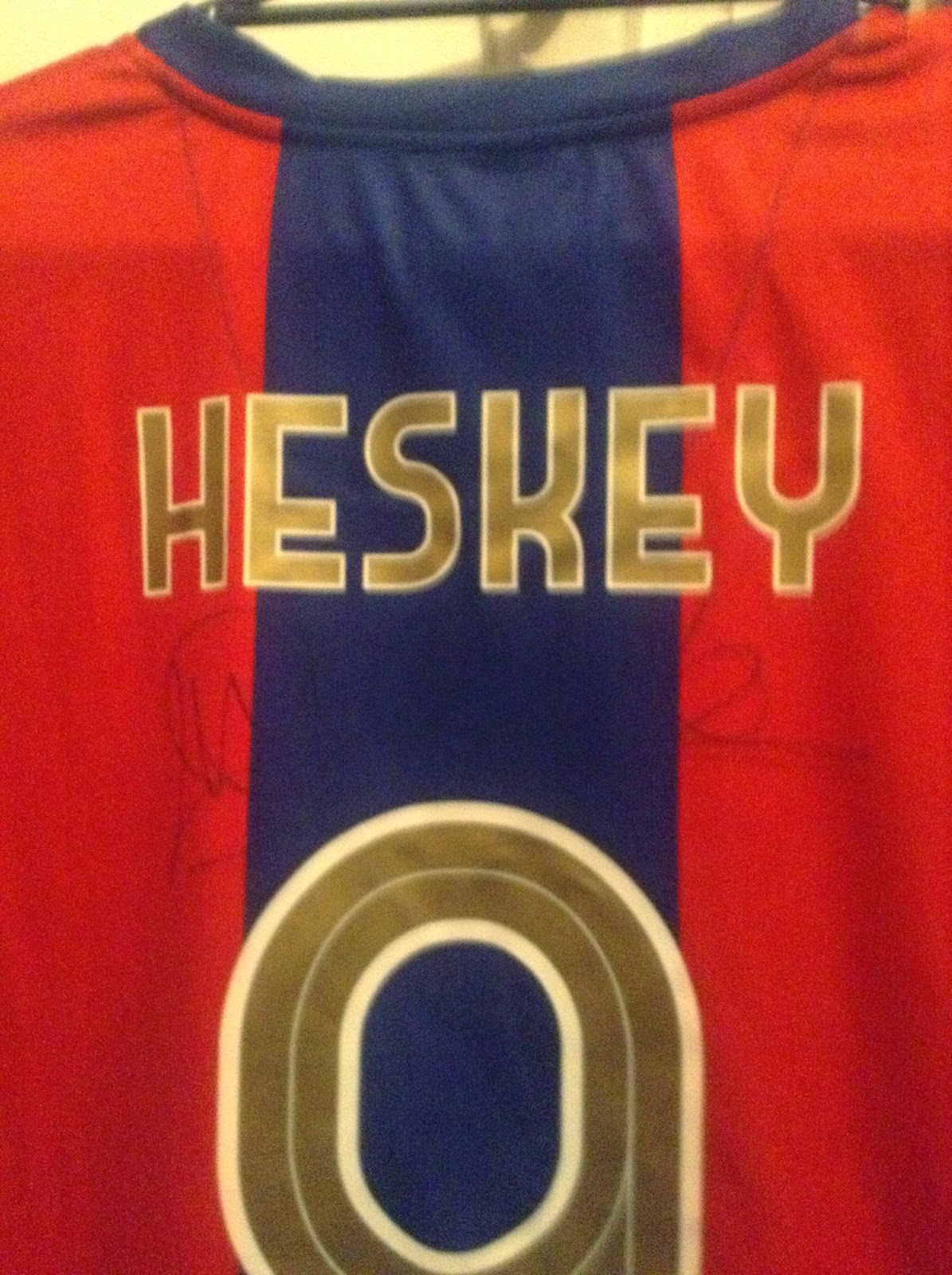 My first Hyundai A-League game was all the way back in 2005 but my first game since then was Sydney FC v Newcastle Jets at the start of the 2012/13 season. It was Alessandro Del Piero's first home game for Sydney and Emile Heskey's second game for the Jets. 35,000 pakced out Allianz Stadium and the atmosphere was deafening compared to most of the rugby league games I'd been to that year.

The Jets scored an upset victory and I was signed up as a member just a couple of days later. It was an enjoyable first season as a Jets fan and I bought their red and blue ISC home jersey. I also bought a second shirt when they were on sale and got "Heskey 9" on the back and although it's hard to see above, the great man signed it himself after a game one night.

I thought I'd do something different for once. I've decided to come up with a list of my 10 favourite 2014 World Cup jerseys. This isn't in any particular order. With that being said, let's start. 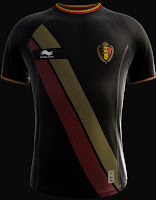 I'm in the process of buying myself a Belgium away jersey. That's how good I think they are. The colours of the Belgian flag are represented perfectly on this design and let's be honest, who doesn't love a sash on a football jersey. Burrda Sports aren't a very well known brand but they do a good job of all three Belgian shirts for Brazil 2014.

They may only wear this kit against South Korea looking at the other teams in their group but that still doesn't take away from the fact that this is Belgium's best kit this World Cup. 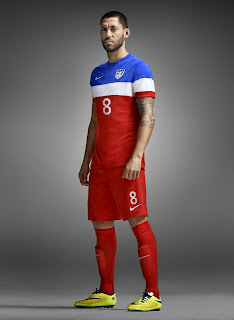 A lot of people trashed this kit when it came out and I must admit I am one of them. I think it would look better with blue shorts but the reason I included it on this list is simply because of it's colours. It's red, it's white and it's blue. It's as American as apple pie and for that it is up there as one of the better World Cup shirts in 2014. I own one of these and it's a very nice shirt. 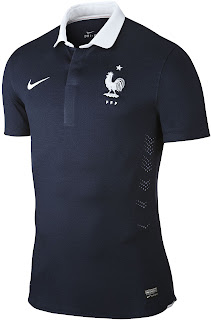 A lot of the jerseys I'm including on this list are being including just for their simplicity. France's home jersey is an example of that. The dark navy blue is good but is brought out beautifully by the accompanying white trim. The collar, the Nike swoosh and the French logo really make this shirt look good. This is another World Cup jersey I already own. Watching the game last night, I couldn't help but admire Brazil's kit. It's mainly the history behind the kit that really makes it one of the more recognizable kits in world football. The yellow and green shirt, the blue shorts, the white socks. This is simply Brazil. The stadium looked beautiful last night with a sea of yellow drowning out any checkered Croatia shirts. Whilst mentioning Croatia, their jersey I have to include on this list due to it's originality. I cannot name any team in football that wear a checkered shirt like Croatia's. They could just wear a red and white shirt and look like Stoke or Sunderland or the 100s of other red and white teams but that wouldn't work. This jersey makes anyone instantly think, Croatia.

I'll be posting Part 2 of this list later on tonight so keep an eye out.

I was absolutely hyped for the opening game of the World Cup when I got up to watch it earlier today. But to be honest, the game wasn't better than any other I've seen. What made me really enjoy it was the crowd. The sea of yellow was just spectacular to see at the Sao Paulo Stadium and the noise inside the stadium must have been deafening.

The crowd made the game feel so special, feel like a World Cup match. From the stunned silence when Marcelo conceded the own goal and the outpouring of delight when Oscar sealed the victory, Sao Paulo should be proud of their efforts. It was amazing to watch.

Onto the game and I actually had a bet on Brazil to win 3-1. I've been thinking for weeks that it would be 3-1 and luckily for me that's how it ended. I won $100 which was a very nice way to start the World Cup. The emotion through the National Anthems was just amazing. I could feel the importance of the game to each and every player on the field.

Finally, Brazil, what can I say. They are such a good team to watch. Neymar, Oscar, Paulinho, hell even David Luiz. They're all such good players and I can see them going a long way in this World Cup. It was good to see Oscar shine on such a big stage as he is one of my favourite non-Man City Premier League players.

All in all it was an exciting start to the World Cup and there is so much more to come.
Posted by Ty Stedman at 14:33 No comments: 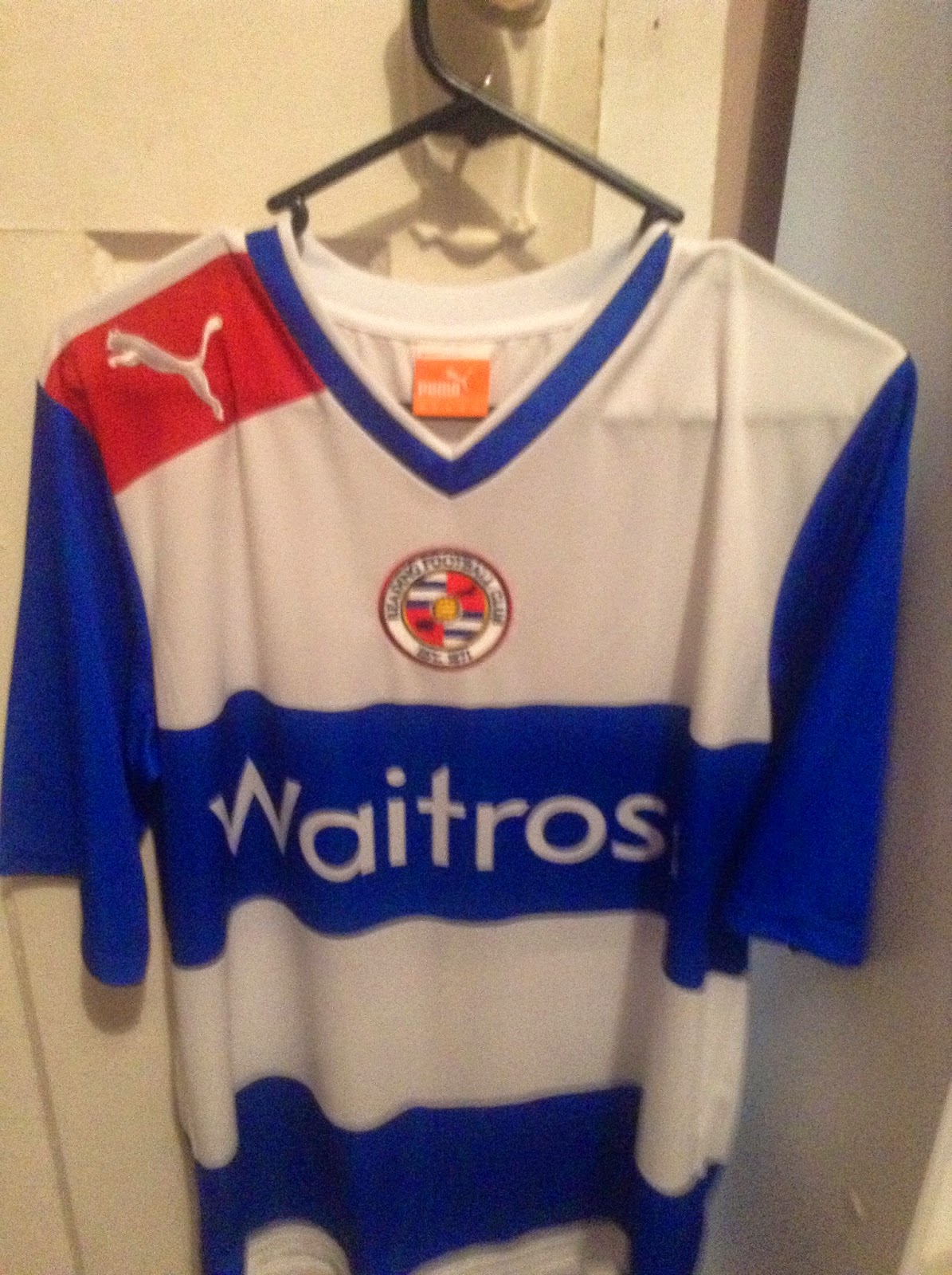 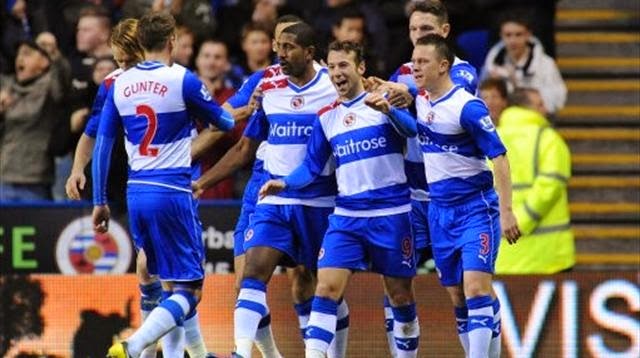 Hey I'm back after a busy few weeks. This is Reading's home jersey from season 2012/13 which saw them play in the Barclay's Premier League. They were relegated of course which meant this jersey was pretty cheap on the classicfootballkits.co.uk website after the season had ended. I picked it up for around $15 which is just a bargain.

It doesn't stand out too much compared to other shirts but it is a pretty nice Puma design. I'm not a big fan of the logo being in the middle but I guess it makes the shirt more unique. I might dust it off and wear it if Reading get promoted next season. Till then it's staying in the cupboard. 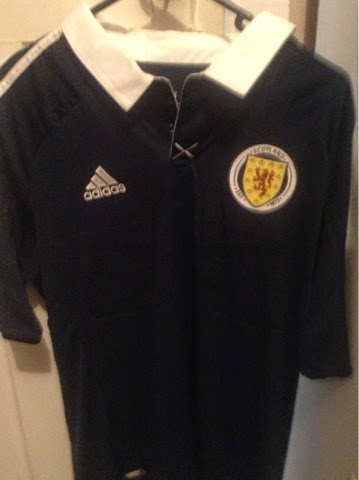 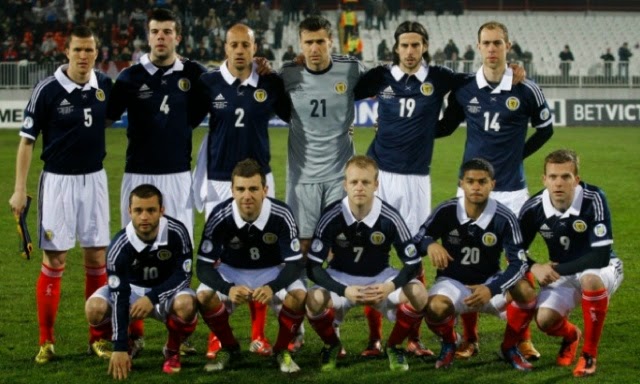 Dark navy blue and white is synonymous with Scotland and their national football team have traditionally worn the colours of Scotland.

This Adidas kit is very nice with the old style collar being the stand-out part of the design. It really does look like a vintage shirt from the early 20th century.

Finally, it's hard to see in the photo but there is a design in the actual material that is based on the Scottish flag.
Posted by Ty Stedman at 15:59 No comments: